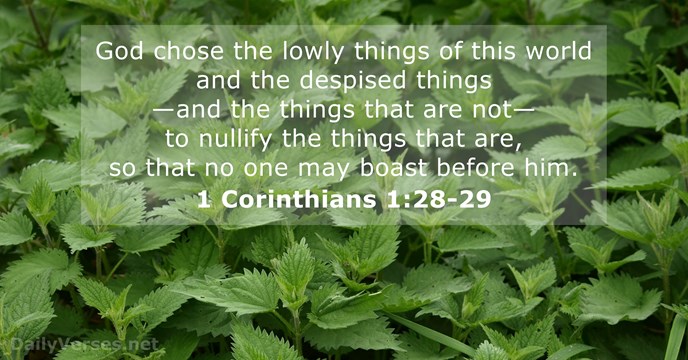 Did Paul just insult me? I guess as an apostle writing by the inspiration of the Holy Spirit he can get away with it. No, he is being real with me and the Corinthian congregation (who did needed to be taken down a peg or two as you can see by the rest of this letter to them).

Instead of boasting our ourselves before God we have Jesus Christ. Jesus Christ in whom we have our eternal life. This is not of ourselves. Not only that, in Jesus we have “wisdom, righteousness, holiness, and ransom from sin.” Jesus is our wisdom before God. He is our righteousness, our holiness and our ransom from sin. We have been brought low so that Jesus and his work, his salvation for us may be magnified. At the judgment seat we point to Jesus and say to the Father, “He is our ransom from sin. He is our righteousness. Jesus is our wisdom. Jesus is our holiness.” The voice from Jesus will then say to us, “Well done, good and faithful servants. Inherit the kingdom prepared for you before the foundation of the earth.”

Heavenly Father, may we ever and only boast about your Son Jesus Christ, our LORD and his great work of salvation for us, so we may be exalted with him in your kingdom on the day of his revelation. In Jesus’ name we pray. Amen.