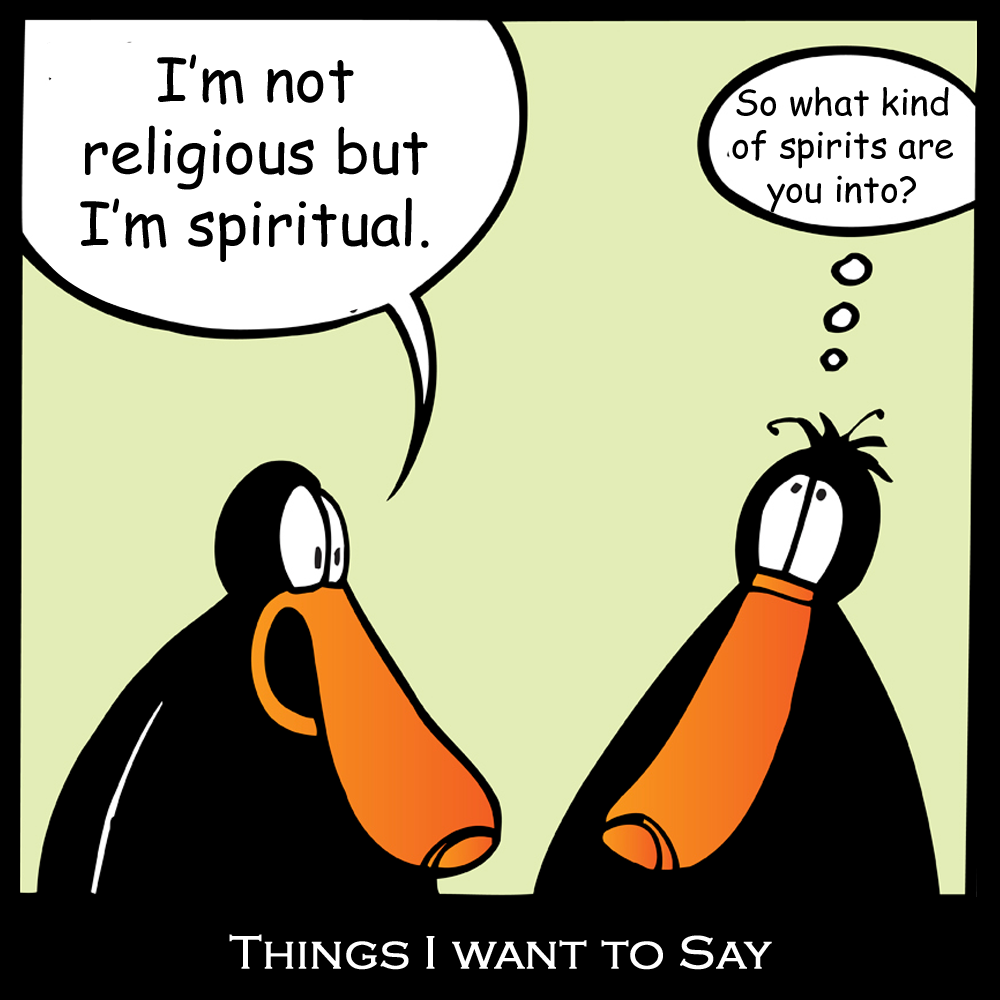 #DailyDevotion If You Are Spiritual & Not Religious, You’re Probably More Religious

Acts 1722 Paul stood before the court of Mars’ Hill and said, “Men of Athens, I see how very religious you are in every way. 23As I went through your city and saw the things you worship, I found an altar with the inscription TO AN UNKNOWN GOD. Now I’m telling you about what you don’t know and yet worship…30“While God overlooked the times when people were ignorant, He now tells all of them everywhere to repent, 31because He has set a day when He is going to judge the world with justice by the Man He has appointed for this. And by raising Him from the dead He has given everyone a good reason to believe.”

Paul complements the people of Athens telling them how he notices how they are religious in every way. You might remember he was disturbed by all the idols that were in the city. Yet in the city there was an altar to “An Unknown God.” It seems it was just an altar. There was no idol upon it which men may worship. Yet for all the gods they worshiped Paul was going to proclaim to one they didn’t know. You would think that the altar and the sacrifices put thereon would be enough.

But Paul is going to let them know who God really is. God, the God they didn’t worship, made the cosmos and everything in it. He was not and is not part of creation. Therefore he doesn’t need a temple to dwell in made with human hands. If he wants a temple, he would create one himself. He does not need worship or sacrifices. Yet we are called to worship him and make sacrifices to him for our own sake, not His. This God give life and breath and everything. He recalls Genesis how God had made the human race from one man and that we in him we move and have our being, so in a sense we are his children. Paul argues from that if we are his children then we shouldn’t think God is like or is idols make from creation.

Now he gets to the meat of things. Men didn’t seek God where he may be found. What they understood about God they rejected. Yet God has not called all men everywhere to repent of their sins because he has set a date for judgment. Yes, we all need a change of mind. We must come to realized there is a God and we are not him nor can we manipulate him. He has given us a conscience to know right from wrong and we don’t and haven’t obeyed that. He has also revealed his perfect will to us in his written Word. Everything isn’t about us. Everything isn’t even all about Him. Everything is about His great love for us in Christ Jesus.

Jesus Christ is the man God has appointed for judgment. He is God so he may know the perfect will of God. He is man so he may know our weakness and judge us with mercy. God the Father has shown us he is the Man appointed for this by raising him from the dead. Because Jesus is risen, we should believe and trust in him. All who put their trust in him will not be ashamed at his coming. When you put your trust in Jesus you have passed from judgment to life. For in Jesus there is forgiveness of your sins. For those made partakers of his covenant the Father forgives them their sins and remembers them no more. You don’t have to forgive yourself, God has forgiven you for Christ’s sake. You indeed are called to be his children and being called his children you are called to act like him and forgive those who sinned against you.

Almighty God and Father, we are your children because you made us, but even more we are your children through our faith in your son Jesus Christ. Keep us in this faith always so we may rightly repent of our sins and forgive those who sin against us. In Jesus’ name we pray. Amen.