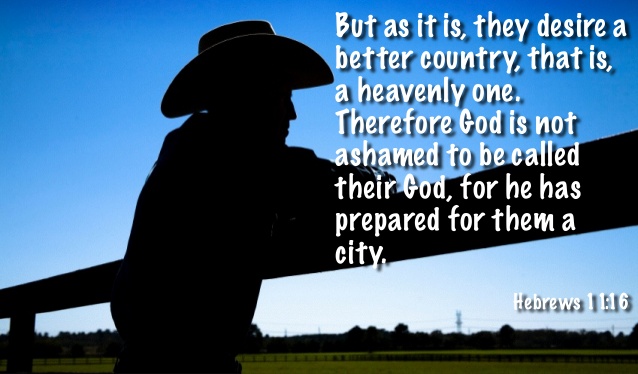 Hebrews 11: 13All these died in faith without having received what was promised. But they saw it far ahead and welcomed it, and they confessed they were strangers and travelers on earth. 14Those who talk that way show they’re looking for a country of their own. 15If their hearts had been in the country they left, they could have found an opportunity to go back. 16Instead, they were longing for a better country – I mean heaven. That is why God is not ashamed to be called their God, because He has prepared a city for them.

Yes, these mighty men of faith died without having received what was promised. If they had received it, they wouldn’t have been living by faith. But they trusted in the one who had promised them. We too, as Christians, unless Christ returns, will die without having received what has been promised us. That is to say, we cannot see or prove from experience that God in Christ Jesus has delivered what he has promised us. We too must walk in that that our sins have been forgiven us, our trespasses against God and the resurrection to eternal life will happen.

Our fathers in the faith saw what was promised and looked forward to receiving it one day. They passed on to us what was promised. They lived and confessed they were strangers and travelers in this age. By doing so they showed they were looking forward to another age, a country of their own, a new heavens and earth. St. Peter exhorts us, 1Pe 2:11 “Beloved, I urge you as sojourners and exiles to abstain from the passions of the flesh, which wage war against your soul.” We are not to live clinging to the things of this age. We need not be covetous of the things we see and act as if we had them we would be well. No, the things of this world are stained by sin. We should live being content with what we need for our daily sustenance.

These heroes in the faith were looking for a better country, that is heaven, being in the loving, merciful, kind and faithful presence of the Almighty. As such, God is not ashamed to be called their God. He has prepared a city for them and for all who share their faith. This is really quite an amazing thing. Usually other gods don’t these peculiar claims on people. They only demand their worship and expect you to be something worth claiming. But our God goes out of his way to claim the poor, the weak, the foolish, those whose chief worship of him is living trusting in this promises, never receiving or seeing in this life what he has promised to them. Because you trust in his promises, he is not ashamed to be called your God either.

Heavenly Father, you have made many and great promises in your Son Jesus Christ. Grant us your Holy Spirit that we may believe these promises and walk in them, so we do not grow attached to this world but fix our eyes on the treasures you have promised and are keeping safe for us in heaven. May our faith in these promises make you glad to be called our God. In Jesus’ name we pray. Amen.