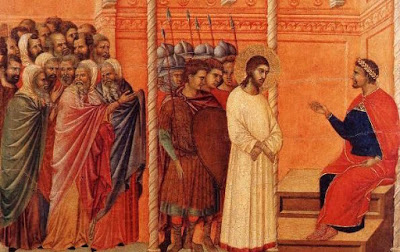 #DailyDevotion God Accomplishes What He Wants Through Wicked People

Acts 2:14a, 22-28 14 Then Peter got up with the eleven, raised his voice, and addressed them: 22“Men of Israel, listen to what I have to say: Jesus from Nazareth — God showed you Who the Man is by doing miracles, startling wonders, and miraculous signs through Him among you, as you know. 23God definitely planned and intended to have Him betrayed, and so you had wicked men nail Him to a cross, and you killed Him. 24But God set aside the pains of death and raised Him – death could not hold Him. 25David says of Him: I always see the Lord before Me. He is at My right hand so that I will not be shaken. 26And so My heart is glad, and My tongue rejoices, yes, even My body will rest hopefully, 27because You will not leave Me in the grave or let Your Loved One experience decay. 28You show Me ways of life. You will fill Me with joy by being with Me.’

Peter’s message here in his first sermon on Pentecost covers a number of things. Here he is laying out the basis for the charge against his fellow Jews who put Jesus to death. First is that God showed who Jesus is (note not was) by the things Jesus had done i.e. miracles, startling wonders, and miraculous signs. These would have been seen by all the people from Galilee to Jerusalem. Many of them were even witnessed by the Jews who came from all over the world to be there for the last Passover. Jesus had healed lepers, paralytics and those of various diseases. Jesus feed the multitudes multiple times with little to start with. Jesus cast out demons and freed people from demonic possession. He taught the people as one having authority and forgave them their sins. He raised many dead. Last of all he raised Lazarus from the dead having been dead for four days and he raised him whole. These things should have convinced them who Jesus was.

This Jesus God planned to have betrayed and put to death. It was God’s plan to have this done. We see it in Genesis 3;15, Isaiah 53 and Rev. 13:8. It was for the salvation of our souls. Yet, how would God get this done? “You had wicked men nail Him to a cross, and you killed Him.” It is always interesting to see God working. God would use the wickedness of men’s heart and what they would accomplish with those wicked hearts to accomplish their salvation and our salvation. Believe it or not, God is still in control over all that happens in the world and in the cosmos. He does accomplish his goals even through all of our wickedness and rebellions. Though I must say, you really don’t want to be his agents in such cases as Christians. Because even if you are his agents, you are still responsible for what you do, cf. the Egyptians, Assyrians and Babylonians.

God also spoke through his prophet David, the king of Israel, that God would raise this Jesus from the dead. That is what he did. The apostles were witnesses to it. Jesus’ family was witness to it. Even some five hundred disciples were witness to it. God’s promise was fulfilled. Death could not hold Jesus and he is now raised and seated at the right hand of God. More than that, what God spoke of Jesus through David now also applies to all who put their trust in Jesus. Our bodies can rest hopefully. He will not leave us in the grave. He will show us the paths of life. He will fill us with joy being with us. Yes, as God raised Jesus from the dead to eternal life, all who put their trust in Jesus will be raised from the dead. Just as Jesus was exalted to the right hand of God in his body, so too we will be bodily with our God, Father, Son and Holy Spirit. As Job has written, “I will see my Redeemer with my own eyes in my own body.”

Heavenly Father your thoughts and plans are higher than ours and you planned our redemption to be accomplished through wicked hands. Give us faith to trust you know what you are doing and you rule over all creation so we may live in peace. In Jesus’ name we pray. Amen.