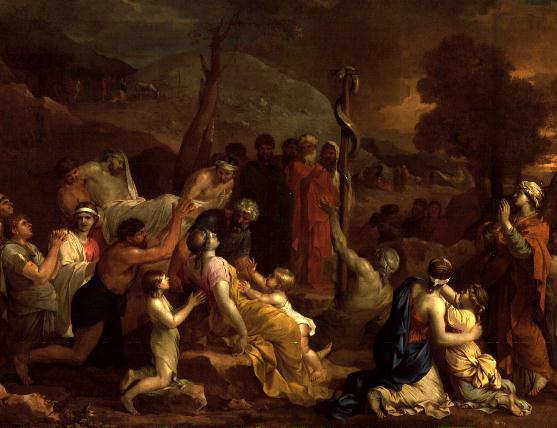 Numbers 21:4–9 4Then they moved from Mount Hor on the Red Sea road to get around the country of Edom, but the people, feeling discouraged about the way, 5spoke against God and Moses: “Why did you make us leave Egypt to die in the desert? There is no bread or water, and we’re sick of this miserable food!”  6So the LORD sent poisonous snakes among the people. They bit the people, and many in Israel died.

We read in Exodus 15, 24“And so the place was called Marah [Bitter]. The people grumbled against Moses. ‘What are we going to drink?’ they asked.”  In Ex. 16, 2 “In the wilderness the whole congregation grumbled against Moses and Aaron. 3’If only we had died by the LORD’s hand in Egypt,’ the Israelites told them, ‘when we sat by our pots of meat and ate all the food we wanted! You brought us into this wilderness to starve this whole congregation to death!’”  In Ex. 17, 2“The people quarreled with Moses. ‘Give us water to drink!’ they said. ‘Why quarrel with me?’ Moses asked them. ‘Why test the LORD?’ 3So there the people were thirsty for water, and they grumbled against Moses. ‘Why did you bring us up out of Egypt?’ they asked. ‘To have us, our children, and our livestock die of thirst?’” In Numbers 13 and 14 when the Israelites were told to enter the Promised Land and take it, they grumbled against the LORD saying the LORD wanted them to die and the LORD responded, 28“Tell them: ‘As I live,’ says the LORD, ‘I will do to you exactly as I heard you say: 29Your bodies will drop dead in this wilderness. Because you grumbled against Me,…’”

This behavior continued in the New Testament. In Luke 5 we read, 30“The Pharisees and their Bible scholars complained to His disciples: ‘Why do you eat and drink with tax collectors and sinners?’” In Luke 15, 2“But the Pharisees and the Bible scholars grumbled and said, ‘This man welcomes sinners and eats with them.’” Again in Luke 19, 7“But all who saw them started to grumble: ‘He went to be the guest of a sinful man.’”  Paul in 1 Cor. 10 writes, 6 “Now, this happened in order to warn us not to long for what is evil as they did…11These things happened to them to make them a lesson to others and were written down to warn us who are living when the world is coming to an end. 12So if you think you stand, be careful that you don’t fall.” In the same he encourages us, 13”You haven’t been tempted more than you could expect. And you can trust God. He will not let you be tested more than you can stand. But when you are tested, He will also make a way out so that you can bear it.”

Heavenly Father, forgive us our grumbling and give us contented hearts that look to you for all good things and trust you will give them to us. In Jesus’ name we pray. Amen.