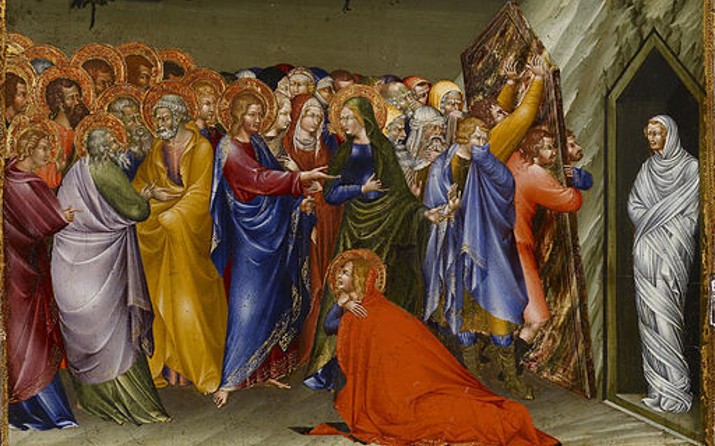 #DailyDevotion Death Is Unnatural, But There Is A Cure

John 1141So they moved the stone away. Jesus looked up and said, “Father, I thank You for hearing Me. 41I knew You always hear Me. But I spoke so that the people standing around Me will believe You sent Me.” 43After He had said this, He called out with a loud voice, “Lazarus, come out!” 44The man who had been dead came out, his feet and hands wrapped in bandages and his face wrapped in a cloth. “Unwrap him,” Jesus told them, “and let him go.” 45Then many of the Jews who had come to Mary and had seen what He did believed in Him. 46But some of them went to the Pharisees and told them what Jesus had done. 47Then the ruling priests and the Pharisees called a meeting of the council. “What are we doing?” they asked. “This man is doing many miracles. 48If we let him go on like this, everyone will believe in him, and then the Romans will come and take away our place and our nation.” 49But one of them, Caiaphas, who was high priest that year, told them, “You don’t know anything, 50 and you don’t consider it is better for you that one man dies instead of the people and the whole nation doesn’t perish.” 51 He didn’t think of this himself, but being high priest that year, he prophesied Jesus was going to die for the nation, 52 and not only for this nation but also to bring God’s scattered children together and make them one.

You know I think practically every pastor at every funeral could look into the casket, call the person’s name and tell them to come out. Death is heart wrenching and unnatural. It is not meant to be. We die though because we sin. The wages of sin is death. Yet even the Resurrection and the Life who knows what he is about to do weeps at Lazarus’ grave. Precious in his sight is the death of his saints. St. Paul tells us he does not want us to grieve as those who have no hope: he doesn’t tell us not to grieve. Jesus believed the Father would listen to his voice and raise Lazarus his friend back from the dead. That Father did listen and Lazarus was raised from the dead. Lazarus would die again though, just like the widow’s son, the little girl and others he and the apostles would raise up at times to give authority to their message.

Even if the Holy Spirit gave me authority as a pastor to raise up the dead like he did the apostles, those people would still fall asleep again one day in Christ. Like Mary and Martha, we have to wait for the Last Day when Christ returns for all the dead in Christ to awaken from their graves, receive new immortal bodies and for us to be changed in an instant to be with them and the Lord in his kingdom here in the new heavens and new earth.

Now Lazarus was dead four days when Jesus came to the tomb. There was no doubt in anyone’s minds that he was already rotting away. Jesus raised him from the grave whole and complete. Such an act had a twofold effect on the Jews. Some believed on him. Many believed in Jesus because of this. Others, who could not deny what Jesus had done did not put their trust in him but rather sought to kill him because he posed a threat to their power under Roman dominion. The high priest in his office prophesies Jesus will die for the whole nation, indeed for the whole world. In his death Jesus swallows up death. He removes the curse of death for all who put their trust in him. Christians do not experience death because Jesus has experienced it for them. They live with the Lord until he returns in glory and raises them from the dead to live eternally with him. Do you believe this?

O kind and merciful Father, you listened to the voice of Jesus and raised Lazarus from the dead. Hear his voice again on the Last Day and have him raise us all who trust in him to eternal life and grant us this faith always. In Jesus’ name we pray. Amen.