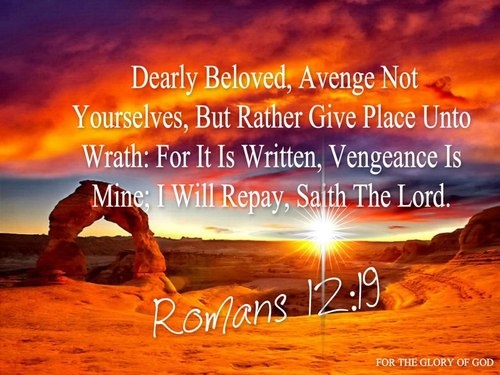 #DailyDevotion Can A Christian Ask For Vengeance?

Jeremiah 2010I hear many whispering, on every side terrifying me, “Denounce him! We’ll denounce him!” All my friends are watching to see me make a false move, saying, “Perhaps he will be misled; then we’ll take him and avenge ourselves on him.” 11But the LORD is with me like a terrifying warrior. That is why those who pursue me will fall and can’t win. They will fail badly because they don’t act wisely. Their everlasting shame will not be forgotten. 12O LORD of armies, You test the righteous and search their inmost thoughts — I want to see You take vengeance on them because I’ve laid my case before You. 13Sing to the LORD.  Praise the LORD because He saves the life of the needy from the hands of the wicked.

Today we continue with Jeremiah’s lament to God. We might want to remember from yesterday his call from God in chapter one, 17“But you get ready for action. Tell them everything I order you to say. Don’t let them terrify you, or I will terrify you in their presence. 18 Today I make you a fortified city, an iron pillar, and a bronze wall to stand against the whole country, against Judah’s kings and officials, priests and people. 19 They will fight against you but will win no victory over you, because I’m with you to rescue you.” Jeremiah was hearing lots of voices around him actually terrifying him. Even his friends were against him because of his prophesying. They were looking to see if he would mess up so they could avenge themselves on him. This promise from the LORD in his call brings forth the response to Pashur who had thrown him in prison and had now let him out.

He had told Pashur, “The LORD doesn’t call you Pashhur but Magor-Missabib [Terror-All-Around).” I guess this is poetic justice for Pashur and his company were after Jeremiah. Now Jeremiah prophesies the Babylonians would be a terror around Pashur and his family. They would eventually be carted off to Babylon and die there like the Israelites who died in the wilderness who did not trust the LORD. Jeremiah was told to not let his opponents terrify him. The LORD would be with him and his enemies would fall and not win.

It may seem unchristian to us for Jeremiah to ask the LORD to provide vengeance upon his enemies. The LORD had promised as much to Jeremiah in his call. Jeremiah in his lament to God was simply calling the LORD to remember his promise. But what about you? Certainly as a Christian you are not to go about getting revenge on your enemies. Paul writes in Romans 1217“Don’t pay back evil for evil. Be concerned with things that everyone considers noble. 18As much as you can, live in peace with everyone. 19Don’t take revenge, dear friends, but let God punish, because the Bible says: ‘I alone have the right to avenge. I will pay back,’ says the Lord. 20But, ‘if your enemy is hungry, feed him. If he is thirsty, give him a drink. If you do this, you’ll heap burning coals on his head.’ 21Don’t let evil conquer you, but conquer evil with good.” As Christians we are called to leave vengeance up to God. If we must we can ask the LORD to provide vengeance upon our enemies. Calling upon him to do it is the proper thing to do. But when we do that we are also called to do something else. We are called, in as much as it depends on us to live at peace with them. Instead we are called to show love to our enemies by feeding them, giving them something to drink and overall just being good to them. In doing these things we hope to win them over and have them repent of their hatred of us. If they don’t repent then there is always the LORD Jesus waiting for them on the Last Day. Jeremiah in his lament also expresses hope in the form of praise. He believes the LORD Jesus will fulfill his promise from his call and will hear his prayer of lament and do something. He praises the LORD because, “He saves the life of the needy from the hands of the wicked.” We may not always see this in our life. It may have to wait for the day of resurrection. We should remember Matt. 1028“Don’t be afraid of those who kill the body and can’t kill the soul, but fear Him who can destroy soul and body in hell.”

Almighty God, may we always turn to you for help and may live our lives according to the word of Jesus. In Jesus’ name we pray. Amen.