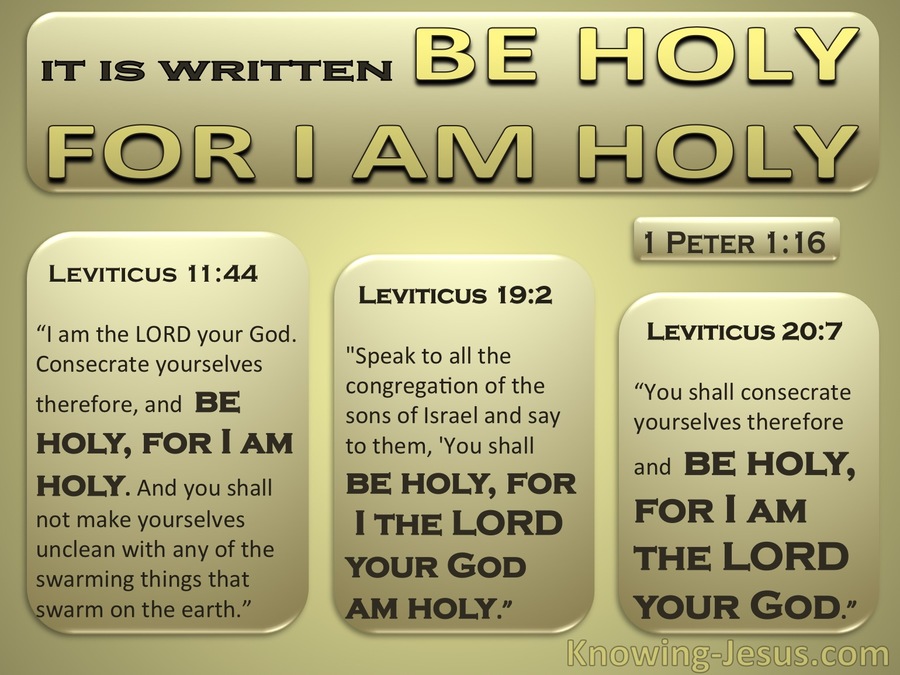 #DailyDevotion Be Holy Because I The LORD Your God Am Holy

Leviticus 19The LORD said to Moses: 2“Speak to the whole congregation of Israel, and tell them: Be holy, because I the LORD your God am holy.15“Don’t be unjust in passing a sentence, giving special favors to the poor or honors to the great, but be fair in judging your neighbor. 16Don’t go around slandering among your people. Don’t take a stand that endangers your neighbor’s life. I am the LORD. 17Don’t hate another Israelite in your heart. Correct him, so you will not be guilty of a sin on account of him. 18Don’t avenge yourself or hold a grudge against your fellow Israelites, but love your neighbor as yourself. I am the LORD.

Sometimes you have to wonder what the people putting the lectionary together are thinking. It would be nice if we had their notes. Why cut out verses 3-15? Why start back at verse 15? We know they are looking for a passage from the Old Testament that goes along with the Gospel and certainly this passage does. Verse 2 applies to Matt. 22:37 and verse 18 applies to Matt. 22:39.  I can only think they want some verses between 2 and 18 to give some examples but they didn’t want to make it too lengthy and they just decided to pick ones closer to 18 than closer to 2. You may just want to go back and read verses 3-14 for your own edification.

So what is going on here? On the one hand the LORD tells the people to “Be holy, because I the LORD your God am holy.” Then we have some commands, sometimes singularly and sometimes in combination. Each one ends with “I am the LORD.” So what does this mean? We know that the people of Israel were holy simply from the reason that the LORD our God had chosen them from all the people of the earth to be his people. That act in itself made them holy. On the other hand, holiness is also a condition of the person. Holy in this sense would be the opposite of evil.  So all of these commands the LORD gives would give them an expression of that holiness the LORD wanted them exhibit to the world. These commands would a. make them distinct from the people around them (not all of them had what we would think of as moral imperatives i.e. burning the food from an offering on the third day [though this may point to the resurrection in some way]) and b. give them a moral base higher than their neighbors in and around Palestine. Being holy as the LORD is holy is to be different than the people and the gods they worshipped who Israel was displacing and those who would encounter them. They would be a witness to the world of the LORD’s great wisdom. Living this way, trusting the LORD and obeying his commands would show they love the LORD their God with all their heart, soul, mind and strength.

Then we get to “Love your neighbor as yourself. I am the LORD.” Now fairly simple most of these commands deal with how you interact with your neighbor. They are more detailed explanations of commandments 4-10. If the Israelites conducted themselves following the LORD’s instructions concerning dealing with other people you would be loving your neighbor as yourself, at least in an outward manner. Certainly you would want people to conduct themselves in these manners when they had to deal with you.

Now what is with “I am the LORD.” This means we should take this very seriously and dedicate our whole heart, mind, soul and strength to pay attention to, meditate on and carry it out. These are not mere suggestions but the very words of our LORD Jesus Christ himself to his people.

Heavenly Father, you have called us out from the world to be holy as you are holy. Give us your Holy Spirit that we may do what you command and love our neighbor. In Jesus’ name. Amen.

Sometimes I find this difficult. Sinner that I am.

We all enjoyed your service yesterday. And we will be back next year when we go camping again . So looking forward to that 🙏

It was great having you bless us with your presence.