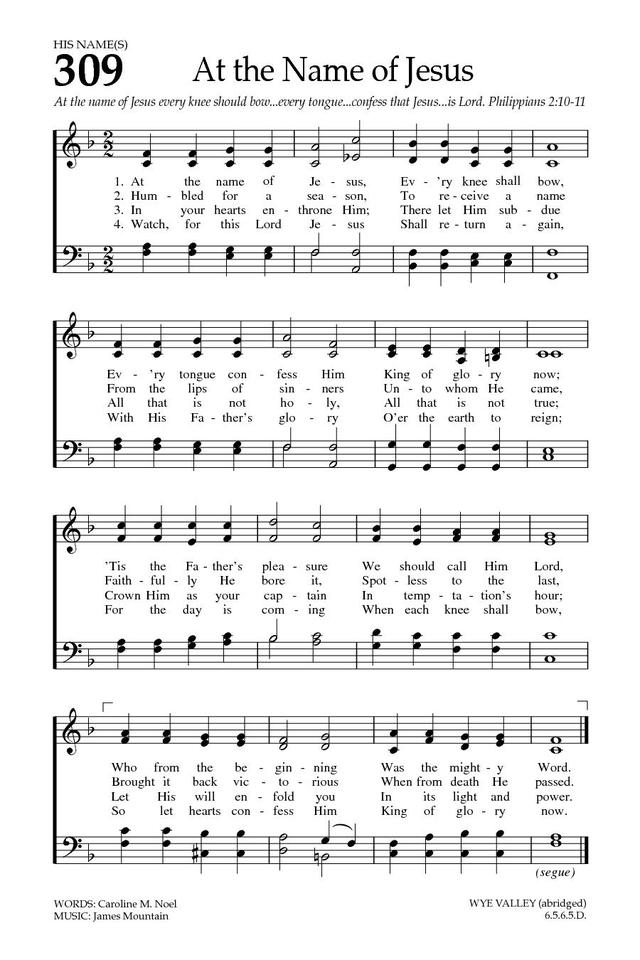 #DailyDevotion At The Name of Jesus Every Knee Shall Bow

Philippians 2:9-11 9That is why God also exalted Him up on high and gave Him the name above every other name 10that at the name of JESUS everyone in heaven and on earth and under the earth should kneel, lland everyone should confess, “JESUS CHRIST IS LORD!” and so glorify God the Father.

It is written someplace, “Whoever humbles himself, God will exalt.” There is simply no one who has humbled themselves more than Jesus Christ who being God took on the form a slave, a servant and offered himself as sacrifice for sin for all people of every place in every age. Jesus said in the Gospels, “If you want to be great in the kingdom of God you must become the servant of all.”

Having done this, God the Father has exalted Jesus on high and gave him the name above every other name. Yes at the name of JESUS everyone in heaven and on the earth and under the earth should kneel before him. The LORD said in Isaiah 45, 21“Speak and present your case. Yes, consult together. Who announced this in the distant past and predicted it long ago? Wasn’t it I, the LORD? And there is no other God besides Me. The righteous God Who can save —there is no one besides Me. 22Turn to Me to be saved, all you most distant parts of the world, because I am God, and there is no other. 23I swear by Myself; what I say is right and can’t be changed: ‘Every knee will bow to Me, and every tongue will swear allegiance.’”

It is only God who can save. It is Jesus that saves. Jesus is the righteous God Isaiah prophecies here. Jesus is the LORD the righteous God who calls the world to turn to him and be saved. Paul is invoking Isaiah here in Philippians when he says, “should kneel, lland everyone should confess, ‘JESUS CHRIST IS LORD!’” Jesus Christ is the LORD speaking in Isaiah. He is the LORD in all the places in the Old Testament you see the word LORD written with all capital letters. It is he who formed Adam from the dust and breathed the breath of life into him. It is Jesus who spoke to Noah and shut him in the ark. It was Jesus who spoke to Abraham, cut a covenant with him and who become himself the seed of Abraham through whom the whole world is blessed. It is Jesus who sent Moses to Egypt and led the Israelites from there with an outstretched arm and brought them to the Promised Land. It is Jesus who defeated Israel’s enemies. It is Jesus who put his name in the Temple providing grace and mercy to all who came to worship there. Jesus is the LORD who spoke through the prophets calling the Israelites to repentance. It is Jesus who brought them into exile and returned them to the land when they sinned and when he pardoned them.

Now the LORD who is Jesus Christ bared his arms on the cross defeating sin, death and the power of the death. It is Jesus who is the LORD who led the captives from the grave to Paradise in his resurrection. It is Jesus who prepares the Promised Land, the New Heavens and New Earth for all who put their trust in him. It is Jesus who will return to us from the right hand of God in glory who will raise our lowly bodies into his glorious body and lead us into his kingdom on the Last Day. And on that day, indeed, every knee shall bow, believer and unbeliever, angel and devil and confess Jesus Christ is LORD to the glory of the Father.

Heavenly Father, grant us faith and give us your Holy Spirit so we may now in faith bow our knees before Jesus and confess him as the LORD who has saved us and delivered us by his humiliation and be exalted with him at his revelation. In Jesus’ name we pray. Amen.