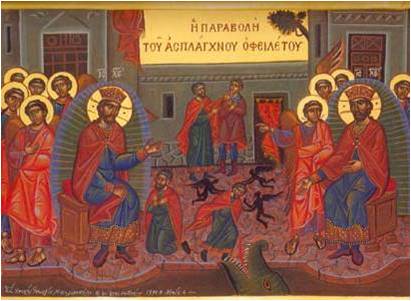 #DailyDevotion As You Believe, So You Will Do

Matt. 1828But when that slave went away, he found one of his fellow slaves who owed him a hundred denarii. He grabbed him and started to choke him. “Pay what you owe,’ he said. 29“Then his fellow slave got down on his knees and begged him, ‘Be patient with me, and I’ll pay you.’ 30But he refused and went and put him in prison until he would pay what he owed. 31“When his fellow slaves saw what had happened, they were very sad and went and told their master the whole story. 32“Then his master sent for him. You wicked slave! he said to him. ‘I canceled all you owed me, because you begged me. 33Shouldn’t you also have treated your fellow slave as mercifully as I treated you?’ 34“His master was so angry he handed him over to the torturers until he would pay all he owed him. 35“That is what My Father in heaven will do to you if each of you will not heartily forgive his brother.”

And now you’re probably thinking, “What?!” Indeed, how could this servant who had just been forgiven more than the national debt go about collecting debts owed to him and not forgive the debt of this guy who owed him a few months pay? Imprisoning his fellow servant until he could pays just didn’t seem right. His fellow servant even begged him to give him time and he would pay just as he did to the king earlier. Why was his heart not moved to mercy as the king was earlier towards him? We’ll discuss that in a moment.

Well the news of what that wicked servant to his fellow servant got back to the king and the king called the wicked servant to appear before him. The king threw him in prison until he paid back every last cent. Now some may take these words from the king as if the servant could eventually pay back the king. No, Jesus is not talking about purgatory. No, you will never get out of hell if you go there. The point is, you can never pay back what you owe. You will never get out.

Now Jesus says those words which some of us cannot bear often, “That is what My Father in heaven will do to you if each of you will not heartily forgive his brother.” It’s not like this is a new teaching from Jesus. When Jesus taught his disciples to pray, the only petition he mentioned was the fifth. Matt. 614“If you forgive the sins of others, your Father in heaven will forgive you. 15But if you don’t forgive the sins of others, your Father will not forgive your sins.” We try to come up with excuses as to why we can’t or won’t forgive those who have sinned against us. For certain, you have sinned greater sins against your Father in heaven than what your fellows have sinned against you. Why will you not forgive your fellows?

It’s very simple. The wicked servant was out collecting debts because he didn’t trust the king to come back to him to collect the debt he owed. He lent money to others and wanted it back so he had something to give to the king when the king changed his mind. You likewise don’t forgive from your heart those who sin against you because you don’t trust that God your Father actually forgave you. You want to point your finger at your fellow and accuse him on the day of judgment like Adam and Eve did in the garden so God won’t look at your sins. But it doesn’t work that way. He deals with us individually. If you believe God forgives you for Christ sake, you will forgive those who sin against you. If you don’t forgive, then God’s forgiveness certainly isn’t dwelling in your heart for yourself. You will be judged and found wanting.

Heavenly Father, grant us faith to trust in the words of forgiveness won for us by Christ Jesus so we may in turn forgiven those who have sinned against us. In Jesus’ name we pray. Amen.