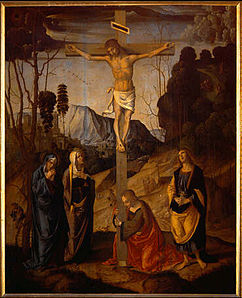 #DailyDevotion Are You Worshipping The Real Lord?

Luk 13:31-33  At that very hour some Pharisees came and said to him, “Get away from here, for Herod wants to kill you.”  (32)  And he said to them, “Go and tell that fox, ‘Behold, I cast out demons and perform cures today and tomorrow, and the third day I finish my course.  (33)  Nevertheless, I must go on my way today and tomorrow and the day following, for it cannot be that a prophet should perish away from Jerusalem.’

Just before this Jesus had told the crowd that many Jews would not enter the kingdom of heaven but many people from all over the world, meaning Gentiles, and Abraham and the prophets would be sitting at the table in the kingdom of God. Jesus had already been having trouble with the Pharisees. They saw people leaving them and following Jesus instead. No doubt they probably thought Jesus was talking about them.

So was Herod wanting to kill Jesus? Probably not yet. He was frightened he might be John the Baptist raised from the dead whom he did have killed. They were probably trying to frighten Jesus away so he would quit taking their disciples from them. Jesus did a fair amount of his ministry in Herod’s territory which was Galilee. Never the less, Jesus answered  and told them, “Go and tell that fox, ‘Behold, I cast out demons and perform cures today and tomorrow, and the third day I finish my course.”

Jesus is no doubt referring to his crucifixion, burial and resurrection here. He’s not saying he’s only spending three days there and doing his ministry there and then he’s finished. He still has a while before he goes to Jerusalem to be crucified. Jesus is speaking to his ministry as a whole. Casting out demons, taking back territory in people for the kingdom of God, overcoming the effect of sin in the lives of the people was what Jesus did in his ministry. But his visible ministry would come to an end. He would continue this mission through his apostles. Through the preaching of his word and the administration of the sacraments he still casts out demon and prepares us to be made whole, without sin, in the world to come.

Jesus would continue his ministry until he accomplished our salvation in Jerusalem. There he would die like many of the prophets before him. The Israelites and the Jews would not heed the call to repentance in the Old Testament and now many of the Jews would not repent of their unbelief either. While having the appearance of worshipping the Lord when the Lord appeared to them and called them to repentance, they would have him killed through the hand of the Romans. After his resurrection many would casts aside their idolatry and repent. Now are your trusting Jesus for your salvation or some idolatrous recasting of Jesus in your own image and likeness?

Heavenly Father, ever give us your Holy Spirit that we might truly repent of all our idolatrous thoughts and ways and truly trust Jesus alone for our salvation. In Jesus’ name we pray. Amen.