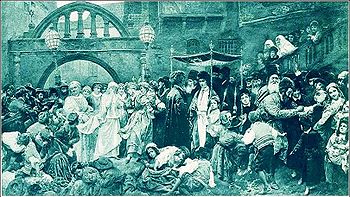 #DailyDevotion Are You Going To The Wedding?

Matt. 22 Again Jesus used parables in talking to them. He said: 2“The kingdom of heaven is like a king who prepared a wedding for his son. 3He sent his slaves to call those who had been invited to the wedding, but they refused to come. 4Then he sent other slaves and said to them, “Tell the people who are invited, ‘Look! I prepared my dinner. My bulls and fattened calves are killed, and everything is ready. Come to the wedding.’” 5But they paid no attention and went away, one to his farm, another to his business, 6band the rest took his slaves, shamefully mistreated them, and murdered them. 7″The king became angry. He sent his soldiers and they killed those murderers. and burned their city.

It’s quite interesting that Jesus picks up a wedding feast as an example for the kingdom of heaven. In the Old Testament it is written, Isa 54:5 “He Who made you is your Husband; His name is the LORD of armies. And the Holy One of Israel redeems you; He is called the God of the whole earth.” Jer. 31:32“‘It will not be like the covenant I made with their fathers when I took them by their hand to lead them out of Egypt — My covenant that they broke although I was their Husband,’ says the LORD.” Hos 2:16 Then,” says the LORD, “she will call Me ‘Ishi’ [My Husband] and no more call Me ‘Baali’ [My Master],..” We can see from these Old Testament passages the LORD considered Israel to be his bride and he was her groom.

This theme is also picked up in the New Testament, besides the Gospels by Paul and John, 2Co 11:2 “I am jealous of you with godly jealousy. I promised you in marriage, to bring you as a pure bride to one husband — to Christ.” Eph 5:23, 31, 32 “because a husband is the head of his wife as Christ is the Head of the church, which is His body that He saves…31This is why a man will leave his father and mother and live with his wife, and the two will be one flesh. 32There’s a great truth hidden here – I mean that of Christ and the church.” Rev 21:2 “And I saw the holy city, New Jerusalem, coming down from God in heaven, dressed as a bride, ready to meet her husband.”

Now Jesus is the Groom and Israel, the Church, are the Bride. The servants are the prophets, apostles and pastors of Israel, the Church. The people who went their own way and did not accept the invitation, who are too busy with life are those who hear the good news of the kingdom and get themselves instead busy with life. They are more concerned with the deceit of worldly things than the life which is forever. Those who mistreated them are those who have killed the prophets apostles, and pastors of Israel, the Church. Because of this, the LORD had destroyed Israel, Judah and the temple twice and those have rejected his claim on them as his bride. Indeed, it is written, “Judgment begins with the house of God,” so those in the Church who hear the good news and reject it will also be so treated on the Last Day when Christ Jesus comes again to receive his Bride.

So where will you be on that day? Have life got you so wrapped up in its details that you have forgotten your betrothed (fiance’)? Do you abuse those God sends to you with the good news? Or do you joyfully receive the invitation to God’s kingdom, meet your Groom in the congregation of the saints, and thank God for those who have brought you this invitation to repent of your sins and believe on Jesus Christ? Be the latter and not the former.

Heavenly Father, may we in faith accept the invitation to the wedding feast of the Lamb, trust in Jesus as our Husband and rejoice in those who bring us the good news. In Jesus’ name. Amen.

Thanks Pastor for the inspiration today.