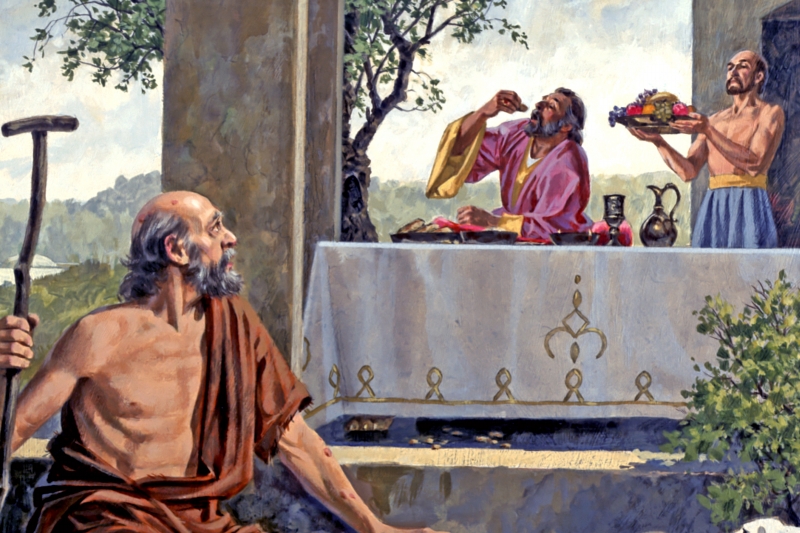 #DailyDevotion Are You Going To Hell If You Are Rich?

Luke 1619“There was a rich man who dressed in purple and fine linen and lived in luxury every day. 20A beggar by the name of Lazarus was laid at his gate. He was covered with sores 2land longed to satisfy his hunger with anything that might fall from the rich man’s table. And the dogs would even come and lick his sores. 22“One day the beggar died, and the angels carried him to Abraham’s side. The rich man also died and was buried. 23Being tormented in hell, he looked up, and though far away, he saw Abraham, and Lazarus at his side. 24‘Father Abraham,’ he called, ‘have pity on me and send Lazarus to dip the tip of his finger in water and cool off my tongue, because I’m suffering in this fire.’ 25“But Abraham said, ‘Remember, son, you had your good things in your life, while Lazarus had his misery. Now he is comforted here, while you’re suffering. 26And besides all these things, there’s a wide chasm fixed between us and you, so that those who might want to cross from here over to you can’t do it, nor do any from there come over to us.’ 27” “Then I ask you, father,’ he said, ‘send him to my father’s home — 28I have five brothers — to warn them not to get into this place of torture.’ 29“ “They have Moses and the prophets,’ Abraham said. “They should listen to them.’ 30No, Father Abraham, he said, “but if someone comes to them from the dead, they’ll repent.’ 31“ ‘If they don’t listen to Moses and the prophets,’ he answered him, ‘they won’t be convinced even if someone rose from the dead.’”

Continuing on the theme of money from the parable of the unrighteous steward and Jesus’ teaching on you cannot serve God and Mammon (worldly wealth), Jesus brings out the parable of the rich man and Lazarus. Now I would just like to start off with a little teaching about parables. It’s been taught for the last hundred years or so that a parable only has one point or teaching. This is not always so. This teaching about parables probably came about from pastors and teachers allegorizing every single detail of a parable which may well be an overextension of a particular parable’s purpose. Then again, it is true that not every detail of a parable has a biblical teaching. Many of the details are just there to carry the story to get to the main point. I do think that generally every parable does have one main point. But, they may have other points being made as well.

The parable of the rich man and Lazarus is one such parable in which people like to make all sorts of theological points which may not be in the parable. Many of the points may be ‘biblical’ that is to say the point true but it isn’t being taught in the parable. Some might be right out wrong. Other points perhaps Jesus is making. So perhaps we should tackle a few points made by others today.

One thing people might teach from this is if you are rich you are going to hell when you die and if you are poor you get to go to heaven. Well that is plainly wrong from the rest of the teachings of scripture. People may think that because Jesus says, “Remember, son, you had your good things in your life, while Lazarus had his misery. Now he is comforted here, while you’re suffering.” If that were the case when the Scriptures say he makes on rich and another poor then that would mean that when God makes someone rich, he does so to send them to hell.

However can we make something of the rich man being in hell and Lazarus being in Abraham’s bosom? Well I think we can from the parable of the unrighteous steward. Jesus said there, Luke 169“And I tell you, with the money that’s often used in wrong ways win friends for yourselves so that when it’s gone, you’ll be welcomed into the everlasting homes.” The rich man did not use his wealth to buy the kinds of friends Jesus would have us to buy, i.e. the poor, widow, orphan, foreigner or priest. The fact that he was not generous with the poor shows he did not have faith in the Lord. A living faith when confronted with someone in need of daily bread takes from one’s own and provides for them. If you believe God has been rich towards you in Christ Jesus, you will be rich towards others who also are in need.

Heavenly Father, always bless us with generous hearts so that when confronted with the poor we may be the hand that gives them daily bread, even as you have fed us with the bread of life, you son Jesus Christ in whose name we pray. Amen.