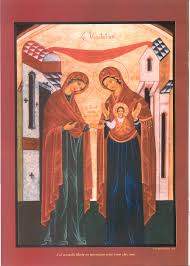 Luk 1:39-45  In those days Mary arose and went with haste into the hill country, to a town in Judah,  (40)  and she entered the house of Zechariah and greeted Elizabeth.  (41)  And when Elizabeth heard the greeting of Mary, the baby leaped in her womb. And Elizabeth was filled with the Holy Spirit,  (42)  and she exclaimed with a loud cry, “Blessed are you among women, and blessed is the fruit of your womb!  (43)  And why is this granted to me that the mother of my Lord should come to me?  (44)  For behold, when the sound of your greeting came to my ears, the baby in my womb leaped for joy.  (45)  And blessed is she who believed that there would be a fulfillment of what was spoken to her from the Lord.”

Elizabeth was already flying pretty high on the hog having been pregnant for six months after a lifetime of being barren. But now Mary comes and visits. As Mary greets Elizabeth, the child in Elizabeth’s womb, full of the Holy Spirit, leaps and the Holy Spirit now also fills Elizabeth and brings forth these words of praise.

Blessed is Mary among women. For millennia now women have been waiting to be ‘the’ woman, the woman carrying the blessed seed, foretold by the Lord to the serpent in the Garden. The serpent would strike his heel but the seed but crush his head. The serpent has been after women and that seed ever since then to prevent him from being born. But now, the woman and the seed have been made known and now is the time. That seed is the Lord himself and Elizabeth’s Lord. Indeed, he is the Lord of all creation. Now he is in the Virgin’s womb. He ha made her womb the temple of his presence if but only for a while.

The seed is blessed because he is the Lord. The Lord has become man and brought humanity into the Godhead. This seed shall save mankind from their sins. And while his heel may be struck and cause him death, he shall rise again and ascend to the right hand of God. He shall sit on David’s throne and upon the throne of God. Elizabeth is humbled that the Lord should take note of her, but he had already taken note of her when he took away her barrenness and opened her womb.

Mary is also blessed because she believed what had been spoken to her, as opposed to Zecharia whose mouth had been shut since he didn’t believe the message of the angel. Mary believed the Lord would fulfill in her what the angel had said. Such faith carries with it the blessing of the Lord. For Mary it was being the chosen vessel of the Lord. For us and for Mary it is the reception of eternal life, the gift won for us by the blessed seed in her womb who would fulfill God’s will and God’s promises for us. By his taken on humanity in Mary’s womb he has taken all humanity into himself and done for fallen humanity that it could not do for itself, be reconciled to God.

Heavenly Father, fill us with your Holy Spirit, that as Elizabeth and Mary believed your word and were blessed, we too may believe and be blessed with eternal life in the blessed seed of Mary, your Son our Lord Jesus Christ, in whose name we pray. Amen.