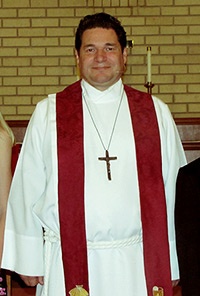 Spreading the word of God is at the top of his list when it comes to what he likes most. “Being able to give away the salvation to eternal life earned for us by Jesus Christ through His suffering, death and resurrection. It’s the best deal I know, salvation free and true.”

“My objective is to never meet anyone without having introduced them to Jesus.”

He and his family moved to Osage Beach, Missouri from Oklahoma and has since enjoyed the Ozark Mountains environment. His ministry at Hope Lutheran Chapel deals with local, many of whom are retirees, and vacationing people as the Lake of the Ozarks is a popular resort community.

His main goal at Hope Lutheran Chapel is to preach Jesus Christ crucified to a community in which only half the population belong to a Christian congregation.

He and his wife have six children: Chad, Guillaume, Jr., Marie, Adele, Constantin and Maximilienne. One serves in the Navy is married and has a child, the other five are home schooled by their talented mother

To learn more about The Reverend Guillaume Williams’ experience and background view his LinkedIn profile.