The beginning of Hope Lutheran Chapel may be traced to the initial 7:30 a.m. Sunday Drive-in Worship Service conducted at the now obliterated Glaize Drive-in Theater adjacent to KRMS Radio Station on July 4, 1958, with the Rev. A. Herbert Muhl, then pastor of Bethany Lutheran Church, Eldon, Missouri, as speaker. 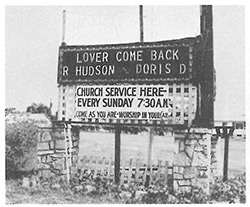 In December 1964, the independent Drive-in Worship Committee recognized the need of a mission in the central Lake of the Ozarks area.  The prior site of Hope Chapel was acquired in April 1965, with personal gifts from the Drive-In and the balance being financed through the Missouri District Church Extension Fund.  An existent house was remodeled for Hope Chapel’s use with all the labor being donated.

A church organization committee was appointed December 20, 1965.  Hope Chapel, having 25 Communicant Members, was organized and chartered on March 27, 1966.  The seasonal Drive-In Worship services were continued at the Hope Chapel site.  The Drive-in Committee became an integral part of the Hope Chapel.

Hope Chapel, being designated by the Missouri District as a joint parish with Bethany Lutheran of Eldon, initiated formal indoor Sunday services at 11:00 a.m.  Hope’s first service was on November 27, 1965, and was conducted by the parish pastor, Donald Veitengruber, who continued to serve until August 1968.  Rev. Gustke was installed on December 15, 1968, and served through October, 1970.  During this period, the first Confirmands, Rick Thompson and Polly Scott, were received into membership on May 25, 1967.

The progressive Hope Chapel membership proceeded with the building of various structures.  One was a manufactured, dual purpose fellowship hall and parsonage acquired and placed on the property in the fall of 1976, and was dedicated February 13, 1977.  A new “Slant roof” was put on the Chapel in the summer of 1977. Construction of a new church building was approved by the voters with stage one being the lower level education building.  Stage two was a 20 x 40 lower level addition in the Spring of 1982.  Stage three was the new sanctuary, dedicated November 14, 1982.  Pastor Egolf continued to serve as pastor until retirement on September 2, 1984.

Rev. John C. Dautenhahn accepted the call to be pastor of Hope Chapel, and was installed on August 26, 1984, as our first “full-time” pastor.

Hope Chapel congregation continued to grow.  A special meeting was called on August 10, 1986, for the purpose of discussing the future building needs of the congregation.  A resolution was proposed and passed to purchase the present site, and to request financing through Missouri District Extension Fund.  The lower concrete walls were begun in the Fall of 1987, with the floor trusses and flooring being added January 1988.  On July 18, 1988 the first arch was set in place.  The task was completed in 52 days, and without incurring any indebtedness, except for the initial land purchase.  Our first service was held September 18, 1988.

The future need for a Mission Church in Lake Ozark, Missouri was a seed the Lord planted in the hearts and minds of the members of Hope Chapel.  In 1993, He began to water and nurture that seed. On February 22, 1995, Rev. Ronald Lehenbauer and his family moved to Lake Ozark, Missouri, and he was Commissioned as the New Lake Ozark Mission Pastor on March 5, 1995.  On July 13, 1995, ”Christ the King Lutheran Church” was chosen to be the name of the church.  The first service was held on January 14, 1996.  During the year of 1996 a constitution and by-laws were drafted and approved, and all was in place.  Christ the King held their Charter Sunday Service on January 12, 1997.  At this time 80 Communicant and 101 Baptized members were transferred there from Hope Chapel to become Charter Members.

The Lord God, has truly blessed this Mission Church.  Its growth has been steady and its members faithful.  It is with great reverence that we give honor, glory, and thanks to the Lord for allowing us to be part of this expansion of His Church.

In 1997 a request was brought to the Council and to the Voters Assembly of Hope Chapel to begin a Mother’s Day Out (MDO) program.  There was much researching and planning during 1998 and a program was presented to the Voters at the October meeting in 1998.  Approval was given and work began.  The first MDO session began in September of 1999, and has enjoyed great success and became Hope Chapel Christian Day School.

In the Fall of 1998, it was decided to form a team ministry.  A call for a seminary student to be an Associate Pastor for Evangelism, Education and Youth, was written and sent on March 05, 1999, to Rev. Dr. James A. Kalthoff, Missouri District President, Lutheran Church-Missouri Synod.  Our call was accepted and on June 18, 2000, Rev. Everett Stewart Pepper was installed as our Associate Pastor. In 2004, Pastor Pepper accepted a call to another church, and left Hope on October 31, 2004.

The year 2004 saw the change of our Hope Chapel Christian Day School.  It became Lambs of Hope Christian Pre-School. In 2007 LOH started offering afternoon classes and daycare.  LOH has grown from just a handful of little ones to 43 enrolled in our 3 programs:  Pre-school, daycare, and afterschool care.

When Rev. John C. Dautenhahn decided to retire in August 2005, a call was extended to Rev. Guillaume Williams, Sr., of Trinity Lutheran Church in Woodward, OK.  Rev. Williams accepted the call and was installed on July 10, 2005, as the Pastor of Hope Lutheran Chapel.

With the death of one of our members in late 2009, Hope Lutheran Chapel received a substantial piece of property that, once sold, would fund the building of a multi-purpose building that will also house a senior center that would provide a home bound meal program. While the Senior Center is located on the campus of Hope Lutheran Chapel, the Osage Beach Senior Center is not part of the church. It is, in fact, a not-for-profit corporation whose goal is to provide meals and activities to senior citizens in the Osage Beach and Lake Ozark area and to bring homebound meals to shut-in seniors in the area.  The Osage Beach Senior Center is operated by Aging Best (formerly CMAAA) Aging Best serves senior citizens over 60 years old in 19 counties in the central Missouri area.  Funding for the building and some of the operations of the Senior Center has been provided by a trust from the Estate of Walter Sokoll, former member of Hope Lutheran Chapel.

Presently scheduled worship services are held at 10:00 a.m. with Bible Class and Sunday School at 11:20 a.m. with Special Services throughout the year.

The members of Hope Chapel are indeed grateful to all who made the planning and completion of this house of God possible.  The many, many donated hours and other contributions are indeed a testimony of the appreciation of God’s abiding love.

We especially wish to proclaim our thanks to a gracious and loving God, who has made this possible and through Whom alone we continue our existence and proclamation of His message.